All Mosquitoes are Not Equal 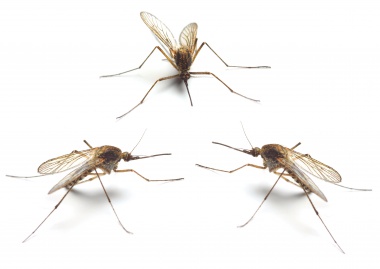 Possibly the most important malaria-transmitting mosquito in Africa is Anopheles gambiae, which likes to bite people indoors between dusk and dawn. This highly specialised behaviour has enabled vector control interventions such as indoor residual sprays and insecticide treated bednets to greatly impact malaria transmission in many regions of Africa.

But other species of mosquito mustn’t be overlooked if elimination and eradication of malaria is to be possible:

Anopheles arabiensis plays an important role in malaria transmission in many parts of Africa. Being more weakly endophilic (ie: likes biting indoors), it is impacted to a lesser extent by indoor focussed vector control tools.

Anopheles funestus is the predominant vector in many parts of Africa,too. Like An. gambiae it mainly bites at night, indoors.

Anopheles nili and Anopheles moucheti play an important role in malaria transmission in humid savannahs, degraded forests and forested areas of equatorial Africa. These mosquitoes are often found near streams and rivers where their immature stages are associated with floating vegetation and other debris.

These two understudied but locally important species, while often found bloodfeeding indoors at night, have a broader range of behaviours and will seek other hosts as well as people.

The variety of mosquito behaviour in Africa alone demands a better understanding that can lead to the development of vector control interventions that target these diverse species and the diversity in their habitat and behaviour.

And beyond Africa, the range of malaria vectors becomes even more complex. Here, there is not only a need for better understanding of the impact of existing vector control tools, but also a clear picture of the novel vector control tools that are needed, especially in low disease transmission settings.

Demonstrating the link between a particular intervention, and disease transmission is a challenging task. But it is a worthwhile and necessary investment for those serious about reducing the burden of malaria.