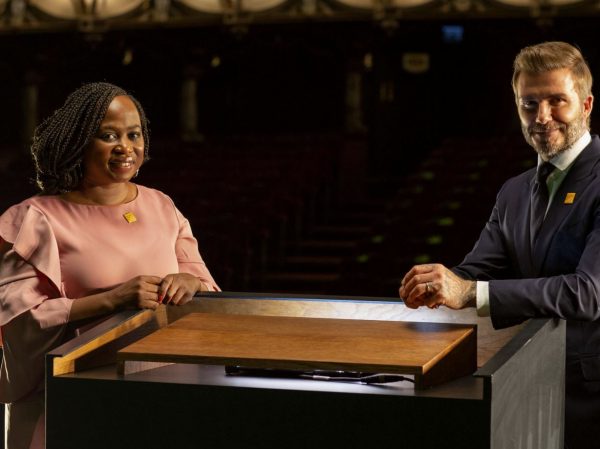 In a ground-breaking new short film, produced by RSA Films Amsterdam, for the campaign Malaria Must Die, So Millions Can Live, David Beckham appears as never been seen before – as an older man in his 70’s – sending a message of hope and optimism from a time in the future when we have eradicated one of the world’s oldest and deadliest diseases – malaria.

Against the backdrop of the on-going global disruption due to the far-reaching impacts of the COVID-19 pandemic, the film aims to reignite the belief that humankind is capable of uniting to defeat diseases, and in doing so we can create a safer, healthier, stronger world for us all, and for future generations.

Developed by Ridley Scott Creative Group, Amsterdam, and Directed by John Filipe, the film opens with an older Beckham delivering an inspiring speech to a large, expectant crowd. As he continues to speak, a visual transformation takes place, and the older man changes back into David Beckham today, speaking as a father and directly to everyone watching, about how a future free of malaria in our lifetimes is entirely possible – but only if we keep up the fight.

David Beckham is a founding member of Malaria No More UK Leadership Council and a committed champion in the fight against malaria with over a decade of support for Malaria No More UK. In his long-term role as a UNICEF Goodwill Ambassador he has seen the impact of malaria on people’s lives in countries such as Sierra Leone.

David Beckham said: “The fight against malaria is a cause close to my heart because the disease remains a huge killer of children and we have the opportunity to change that in our lifetime. I’ve worked with Malaria No More UK since 2009, supporting campaigns and helping shine a light on the challenge. Their campaigns always use great creativity and innovation to attract attention to the issue and I’m delighted also to have met some of the inspiring people who are working so hard to end this disease.”

To accompany the main film there is a behind-the-scenes montage film which features leading scientists, doctors, researchers, activists, and champions from key organisations who are all playing a critical part in helping to end malaria in a generation.

Ingrid Etoke, IVCC said: Growing up in Cameroon in West Africa, I always had the shadow of malaria hanging over me. I suffered from malaria many times and I lost my cousins to the disease. But it doesn’t have to be this way. I believe that in the not-too-distant future, we will beat this disease and young children dying from malaria will become an old and distant memory. This will mean more funds are freed up to invest in education, in infrastructure, in the economy, in healthcare in defeating other diseases and in doing so creating a world that is better prepared to take on future pandemics.”

Malaria has plagued humanity throughout history and ending it has, at times, felt like a distant dream. Progress to end the disease has stalled over recent years. Countries and leaders need to maintain funding, commit to greater access to existing tools and invest in new transformative tools to ensure that ending malaria is a high priority.

This global coalition campaign asks everyone to share the film far and wide on social media, and in doing so, demand that their leaders remain committed to delivering a safer, malaria-free world that we now know is possible.

Experts convened by the World Health Organisation (WHO) agree that malaria eradication is likely to save millions of lives and billions of dollars. In 2019 The Lancet Commission on malaria eradication – made up of leading scientists from around the world – found that if we focus efforts on strengthening leadership, increasing investment, prioritising research and innovation, including the development of new tools, and implementing smart, data driven programmes, ending malaria is possible within a generation. Decisions made now by global political leaders – backed by strong public support – will determine this trajectory.

Dr Pedro Alonso, Director of the WHO Global Malaria Programme, said: “Two decades of global commitment and action have shown the world that the global malaria community knows what it takes to drive unprecedented progress in the malaria fight, cutting deaths by more than 60 per cent and saving more than 7 million lives since 2000. But the world we live in has vastly changed since then, and the far-reaching impact of COVID-19 on malaria responses may not be known for some time.

“The emergence of COVID-19 has shown the world how critical our health systems are. It is crucial that 2021 sees the world getting back on track towards achieving existing targets to reduce malaria as we come through the pandemic. By investing in ending malaria, we will not only save lives that would otherwise be lost to this deadly disease; we will also protect current health systems

from the double burden of malaria and other diseases like COVID-19. Increased investment in malaria also helps to build the foundations of stronger health systems going forward which will protect communities from future health crises, giving children everywhere a better start in life and building a more secure world for all.”

Indeed, this year’s WHO World Malaria Report, shows that now is not the time to step away, with over 400,000 malaria deaths reported in 2019, predominantly among children under five across Sub-Saharan Africa.

The report also reveals that COVID-19 poses a threat to malaria progress, but that existing investment and infrastructure to date – combined with a remarkable collective effort – has enabled countries to fight back. Most malaria prevention campaigns moved forward in 2020 without major delays – millions of mosquito nets will have been delivered by end of year, hundreds of thousands of houses have been sprayed with insecticide, and millions of children have been reached with preventative treatment.

However, even with the remarkable actions taken by countries, malaria cases and deaths may rise since history has shown that malaria will return with a vengeance when health systems are disrupted. The World Malaria Report shows that interruptions in diagnosis and treatment have ranged from between 5% to 50%, and the full impact of COVID-19 on malaria responses may not be known for some time.