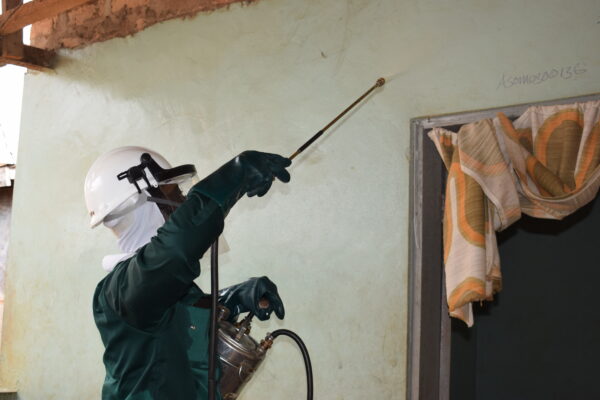 The efficacy of IRS for malaria control is threatened by widespread resistance in Anopheline vectors to the limited number of insecticide classes currently approved for public health use. Pyrethroid resistance is present across Africa and resistance to carbamates and organophosphates, which were for many years the only alternative IRS insecticide classes to pyrethroids, is also increasing in Anopheles vector populations. In response to the growing threat of resistance to the efficacy of IRS, the World Health Organization’s (WHO) Global Plan for Insecticide Resistance Management (GPIRM) in Malaria has recommended the use of IRS products containing insecticides with different modes of action in annual rotations.

The use of rotations for IRM relies on the fitness cost that resistance mechanisms have on mosquitoes.  Removing selection pressure exerted by a particular insecticide by switching to alternative insecticide classes will result in the frequency of resistance declining over time. Therefore, IRM based on the rotation of different IRS products will reduce selection pressure for the maintenance of existing insecticide resistance and reduce the speed of development of further resistance. However, implementation of IRS product rotations requires at least three IRS insecticides with different modes of action. This is driving the development of a more diverse portfolio of IRS formulations containing new chemistries which can provide sustained control of insecticide-resistant malaria vector populations.

Broflanilide (TENEBENAL™) is a novel insecticide discovered by Mitsui Chemicals Agro, Inc. (MCAG) which has been formulated as VECTRON™ T500, a wettable powder for IRS. Broflanilide is a meta-diamide insecticide which acts as a non-competitive antagonist of the γ -aminobutyric acid (GABA) receptor of chloride channels of the insect inhibitory nervous system and has been classified by the Insecticide Resistance Action Committee (IRAC) as a GABA-gated chloride channel allosteric modulator (IRAC Group 30). In a collaborative project between MCAG and IVCC, supported by a network of collaborating trials facilities in Africa, the bioefficacy of VECTRON™ T500 has been evaluated in laboratory, experimental hut and community trials. VECTRON™ T500 has demonstrated excellent activity against pyrethroid-resistant strains and populations of Anopheles with residual efficacy of 6 months or more on various wall substrates. These results indicate the potential of VECTRON™ T500 as an addition to the arsenal of IRS products needed to maintain both control of malaria and IRM of malaria-transmitting mosquitoes.