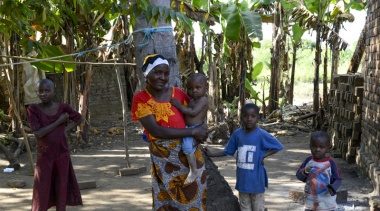 Although I have never lived in Africa, I’ve travelled there enough times to have a reasonable feel for the place. Urban Africa, busy, chaotic and unsafe contrasts enormously with the friendliness and warmth of Africans in rural communities, who despite their obvious hardship, will ask me to stop and share a cup of bitter tea with them.   The remote villages I visit lack many of the conveniences that we take for granted.   Mostly, there’s no running water, electricity is occasional and the air at dusk is filled with smoke as food is prepared and cooked in family compounds. Living is basic, but there’s a strange contrast between pinging money using mobile phones with crushing caterpillars to eat and livestock living amongst families with crowds gathering around flat screen TVs to watch Champions League football.

Life can be exceptionally tough.  Basic food may be available year-round for most so while there may be little excess it looks like no one starves.  There’s not much money and that’s ok when hard work is the main price for food, but the lack of access to a modern healthcare infrastructure can mean that when disease hits, there can be no money to pay for treatments, and this can devastate families and villages without warning.

90% of malaria cases occur in sub-Saharan Africa, and kills over 400,000 people every year – the vast majority of which are children under five.

Many villages have insecticide-treated bednets which provide proven malaria protection when sleeping at night. But there are never enough, mosquitoes can bite at times when no one is under their net and outside the home, and not everyone likes to use them.   Now and again when you ask if a householder has a bednet, they pull out an unused net, still in the bag to show.

Insecticide treated bednets not only provide personal protection through the physical barrier of the net, but the insecticide also provides effective community protection as contact with the net kills the mosquito meaning it can’t fly off and infect someone else.

However, this critical community effect which reduces the volume of biting mosquitoes, only works if the mosquito is not resistant to the insecticide.  Resistance is a huge issue today.  We are at a critical tipping point and without innovation in insecticide resistance, the huge gains in malaria reduction we have made since 2000 could rapidly unwind with devastating effect, but insecticide resistance is complex. There are different underlying mechanisms in different locations, species of mosquito and regions that impact the performance of different insecticides in different ways that makes measuring the benefits of different interventions on disease transmission complex.

That’s why the arrival of BASF’s Interceptor® G2 is so important.  This net introduces a safe and reformulated insecticide from agriculture into public health – a first in 30 years.  Because mosquitoes have not been exposed to it before, it will be effective against mosquitoes that are resistant to the insecticides that are commonly used on bednets.  Of course, this product alone will not solve the problem.  More resistance beating public health insecticides need to be developed and used in a way that preserves their effectiveness in the long term by developing and following resistance prevention strategies.

That’s why IVCC is working with companies across the world to develop new public health insecticides for bednets as well as new resistance beating formulas for spraying on the inside walls of homes, another proven and effective intervention.  We are also investigating a range of other technologies which will reduce outdoor biting.  We have a long way to go but we are hopeful that, together with our industry partners like BASF and our dedicated funders, innovation in vector control can help create a world without malaria.