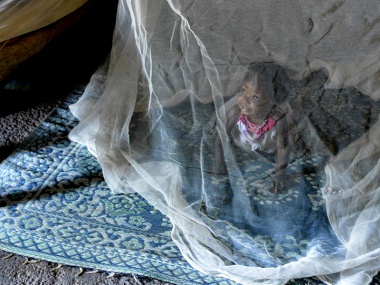 IVCC is to lead a consortium of partners on a ground-breaking project funded by Unitaid and the Global Fund to bring to market new versions of insecticide-treated bed nets to fight malaria-carrying mosquitoes that have become resistant to older insecticides. It is hoped that the nets will provide a stronger line of defence against malaria for millions of people.

The Global Fund and Unitaid will each contribute US$33 million to the four-year project. The coalition, consisting of PATH, Population Services International (PSI) / Alliance for Malaria Prevention (AMP), London School of Hygiene and Tropical Medicine (LSHTM), with support from Imperial College London, Liverpool School of Tropical Medicine, and Tulane University, will run between 2018 and 2022.

The project will build the evidence needed to allow WHO to consider making new policy around the use of these nets and will also assess their cost-effectiveness under pilot conditions.

The production volumes procured for the pilots will help the project to negotiate significant price reductions. These reductions are needed to make the new nets a sustainable choice for countries looking for the best value for money in controlling malaria.

Nick Hamon, CEO of IVCC said; “The continued success and impact on lives saved of the NGenIRS project means that IVCC is well positioned, with its project partners, to demonstrate the public health value of new dual active ingredient bed nets and deliver radically new solutions to combat the growing threat of insecticide resistance which is prevalent across malaria endemic countries.

Unitaid’s Executive Director Lelio Marmora added: “Working with partners such as the Global Fund, we can leverage the effect of our innovations, such as new insecticides and new insecticide-treated nets,” said “Together we can make a powerful impact against malaria.”

Mosquito nets provide a physical barrier against mosquitoes and treating the nets with insecticide makes them lethal for mosquitoes that land on them. One of the most effective means of preventing malaria is sleeping under a long-lasting insecticidal net.

Mosquitoes’ resistance to insecticides threatens to undermine progress against malaria. Although the number of new malaria cases has fallen dramatically over the past 15 years, progress has recently stalled. According to the World Health Organization, there were 216 million cases of malaria worldwide in 2016, 5 million more cases than the year before.

A child dies of malaria every two minutes, although the disease is preventable and curable.

“By investing in insecticide-treated nets and other tools, the Global Fund partnership has greatly reduced the burden of malaria,” said Peter Sands, Executive Director of the Global Fund. “This project is a step toward accelerating impact by embracing innovation – with the ultimate goal of malaria elimination.”

The New Nets Project will support the WHO’s malaria goals, which aim by 2030 to reduce malaria cases and deaths by 90 percent, eliminate the disease in at least 35 countries and prevent a resurgence in countries that are malaria-free.

IVCC is leading another Unitaid-funded initiative, the US$65 million NgenIRS project, which is ushering in new long-lasting indoor residual insecticide sprays to replace less-effective older chemistries and formulations. Unitaid’s work against malaria extends to the Asia Pacific Region, where it is collaborating with the Asia Pacific Leaders Malaria Alliance (APLMA) on the Vector Control Platform for Asia Pacific (VCAP), a collaborative platform to improve access to new vector control tools.