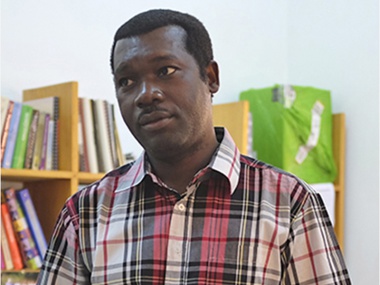 A long-time collaborator of IVCC and LSTM has been awarded this year’s Royal Society Pfizer Award for his malaria research. Dr Abdoulaye Diabate, who is investigating the mating systems of Anopheles gambiae, will receive £60,000 towards a study which aims to cut the mosquito’s high reproductive rate and thereby control the spread of malaria.

Dr Diabate, who is from Burkina Faso, was nominated for the award by LSTM’s Head of Vector Biology, Professor Hilary Ranson. Professor Ranson, who will be present at the award ceremony, said: “Dr Diabate is an exceptionally talented and creative vector biologist who is a thoroughly deserving recipient of the Royal Society Pfizer Award. His pioneering work on mosquito mating behaviour is opening up exciting new possibilities for controlling malaria and I am delighted that he now has the opportunity to pilot some of these ideas via the Pfizer Award.”

“We have collaborated with Dr Diabate on several occasions and the work that he will be able to carry out following this award, will have genuine benefits for all of us involved in trying to control the transmission of malaria.”

The new study, funded by the Royal Society Pfizer Award, will allow Dr Diabate to gather results on male mating behaviour that will be instrumental to the implementation of a full range of new malaria control tools / technologies, for example, engineered mosquitos and sterile insect techniques which rely on a good understanding of male biology.

Commenting on his prize Dr Diabate said: “The Royal Society Pfizer Award is such a wonderful and motivating award for African scientists. Not only does the prize boost high quality research in Africa by empowering African research institutes but in my specific case it will also allow me o quire the skills and knowledge that can help us win the battle against Malaria.”

The Royal Society Pfizer Award is designed to reward scientists, based in Africa, at the outset of their career and to promote science capacity building in the developing world. It is awarded annually. The award, first made in 2006, recognises research scientists making innovative contributions to the biological sciences, including basic medical science.