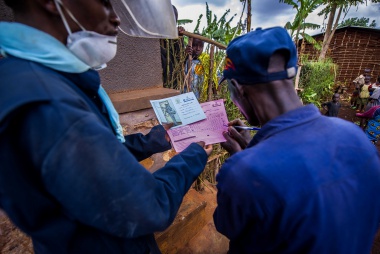 Sumitomo Chemical and IVCC are proud to announce that Sumishield® 50WG has been prequalified by the World Health Organization (WHO).   With a brand-new mode of action chemistry for indoor residual spraying (IRS), Sumishield® 50WG represents a significant breakthrough, providing a new tool to allow program managers to rotate between chemistries and be better equipped to manage resistance.

Dr. Nick Hamon, Chief Executive Officer at Innovative Vector Control Consortium (IVCC), said: “Mosquito resistance to current insecticides is threatening the huge gains made so far in reducing deaths from malaria, so we desperately need effective chemistry with modes of action new to public health to combat these resistant mosquitoes, and enable rotation with other products.  News that Sumishield® 50WG has recently obtained a WHO PQ listing is therefore very welcome and will prove to be a very valuable tool in the vector control toolbox.”

“IVCC and its partners on the Unitaid-funded NgenIRS project are looking forward to adding this new third generation indoor residual spray (3GIRS) to the toolbox of insecticides that can be supported through the established reduced pricing mechanism.  This will give African malaria programs a second affordable long-lasting insecticide to be used in rotation for resistance management.”

With a single mode of action chemistry based on the neonicotinoid insecticide, clothianidin, Sumishield 50WG gives malaria prevention programs greater flexibility when rotating with other chemistries. The formulation has proven efficacy under WHO supervised trials and continues to work effectively for up to nine months after spraying, even against highly resistant mosquitoes.

Due to a non-repellent formula, mosquitoes are exposed to SumiShield 50WG for longer, increasing mortality and reducing the chances of resistance developing. The odourless spray also has very low mammalian toxicity, doesn’t cause irritation through skin contact and won’t stain walls, which creates better acceptance by householders.

WHO figures show that nearly half the world’s population is at risk of malaria and despite great gains madea drop in both incidence and mortality rates in recent years, there are over 200 million new cases every year. Increased prevention and control measures have led to significant gains, but these are under threat due to insecticide resistance, which affects 75% of countries with ongoing transmission of the disease. Rotating insecticides is one of the key strategies for avoiding resistance, however nearly 87% of affected countries are failing to do this, largely due to a lack of alternative chemistries to choose from.

For further information on the WHO Prequalification of SumiShield, visit : http://www.who.int/entity/pq-vector-control/prequalified-lists/sumishield50wg/en/index.html